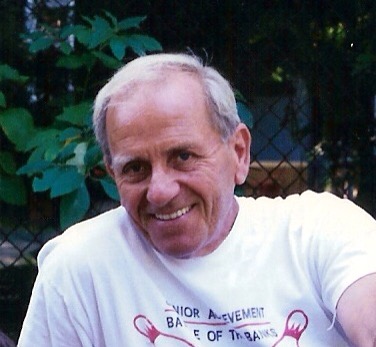 This week our family lost its patriarch, Bruno Nicholas Cergol.

Bruno was my father in law who, over the last ten months, fought a brave battle against leukemia. We all called him “Poppi.”

The best way for me to honor Poppi is to share the heartfelt words of his oldest son, and my husband, Greg.

On a very difficult day, Greg soothed many hurting hearts with the following tribute:

One of my earliest memories of Poppi came when I was about four or five years old.

He arrived home on a Friday night after picking up some pizza for the family.

And he proceeded to tell us how….after leaving the pizzeria….he stumbled on three men…trying to steal his car.

Needless to say….by the end of Poppi’s story….the three battered and bruised thieves were in police custody.

And Poppi was on his way home.

Poppi was always bigger than life.

An imposing physical presence….with massive hands that would swallow yours when he greeted you.

He was a man of few words…because he didn’t need them.

You always knew he was there.

In our Queens neighborhood, my teenaged friends were tough, brash and fearless.

They always called him “the Big B”….a nickname of endearment and respect….they use to this day.

Poppi…of course… had a heart to match that big body.

There were few days when he didn’t put others ahead of himself.

One story Poppi told me only recently captures that spirit.

Poppi and his teenaged friends were driving to a neighborhood party when they crossed paths with a group of girls.

These girls were not part of the “in” group and they definitely weren’t invited to the party.

Within minutes…the girls were piling into the car with Poppi’s buddies and off they all went to the party.

We all know Poppi as a builder.

But he had a great many jobs in his life.

He sorted piano parts for Steinway.

Served as a clerk in a lumber yard.

There were two constants in everything he did—

A passion to do the job right…and a desire to be creative.

Poppi often told Joan and I he would have liked to work as an architect.

Even as a teen, he dreamed of doing more….so much so…that when his father initially tried to push him toward a career as a mason….

Poppi told the man he loved deeply…it wasn’t for him.

For years, Poppi recalled that conversation with regret.

It’s not easy to tell your dad…..his life is not your dream.

But as we know….fate directed Poppi down a similar path.

His father’s death forced him to grow up fast.

He left high school, and went to work helping to support his family.

Even when a scout for the Brooklyn Dodgers came calling, Poppi had to forego a career as a pro baseball player to help keep food on the table.

Poppi’s life often reminded me of the character George Bailey’s in “It’s A Wonderful Life.”

He always had to set aside personal dreams to meet his responsibilities to others.

At times, I know Poppi was tormented by the inability to chase those dreams.

I don’t think he ever got over losing his father so young.

But he rarely complained about it.

His answer….was to help US chase OUR dreams.

He never stopped talking about the importance of a higher education.

College wasn’t an option for us.

He and mom made it a requirement…like going to church on Sunday.

But also his two oldest granddaughters.

On the way to those college degrees, we all served summer internships with the firm—BPF Construction.

And not just my brothers—cousins Jeff and David and others toiled at the feet of CEOs, Bruno, Gino and Frank Cergol.

They worked us hard…probably to send the message school was the better option.

In the days before BPF, my cousin Dennis decided to abandon college for the working world…

And after just one day with shovel in hand…Dennis is said to have run back to class.

He completed his undergraduate studies and still enjoys a career as a prominent environmental lawyer.

Poppi relished that tale whenever it was told.

While we worked hard, the BPF crew also laughed loudly and often.

And we always enjoyed a nice lunch.

Along the way, Poppi and his brothers created works of art with stone…brick…cement and wood.

If you could dream it, they could build it—fountains and patios…kitchens and bathrooms….spas and steam rooms.

“No problem,” was Poppi’s typical response, no matter what the project.

He was unflappable, always able to figure out a solution for a problem that didn’t seem to have one.

And he did every job as if he was working on his own home.

In many ways, using that toolbox was Poppi’s way of showing how much he loved us.

And he dispensed a lot of love.

He renovated my homes…and all my brothers.

And as Gary has noted often….it was about much more than the work.

That time we had with him…in my case…often doing more harm than good as his “assistant.”

Now, every time we look around….we will be blessed to see a piece of him.

One of the few times he ever HAD a problem was at a birthday party for my girls.

Poppi dressed as a clown and was given the task of handing out balloon designs to the kids.

No matter what they asked for—a dog or a hat or a heart…the balloons all looked the same.

He also loved his friends. Many of you have known him since childhood.

Some like Uncle Richie helped save his life after a horrific car accident as a teen.

Others laughed with and comforted him over this last difficult year.

But to celebrate the good times you all shared.

Good times…like the trip we took with Grandi and Poppi to Italy.

It was reality TV at its best—

Six of us, with 20 pieces of luggage…

And despite all that luggage, Poppi seemed to wear the same light blue sweater every day.

Joan was able to trace all the restaurants we visited by pointing to the collection of food stains on that sweater.

We toured Italy in a mini bus that was often the biggest vehicle on the road….

…barely able to squeeze through the narrow streets.

At one point, Joan hid on the floor as Poppi propelled us along a tight road dangling above a cliff overlooking Lake Como.

And through these last weeks….we saw what that meant to his family.

My mom…my wife and daughters…

My brothers and sisters-in-law….Gary and Gina, Chris and Mara, Mark and Bonnie….and all their kids….

They came to make Poppi laugh…to hold his hand…to cook him a meal.

And then as word spread about how sick he was….a flood of people arrived at the hospital, and then to his home last week.

His brothers, his sister, his nieces and nephews. His lifelong friends.

It was amazing to see.

Your love crushed his illness that day.

Poppi, we all know, had many physical challenges in his life.

And Grandi was always at his side to get him through.

Their bond was unique.

He hated phones ringing….she could never let one go unanswered.

She hoarded too much….He wanted to throw everything away.

But their bond was unbreakable.

They made each other better…

…especially as my mom helped him find his faith.

Much of the man Poppi was…..came from the woman with whom he spent 58 years.

On one of his last nights…Poppi asked that we turn up the lights in the family room….

No one understood until we realized he was looking at a photograph of his 10 grandchildren.

Losing Poppi isn’t easy….It’s hard for all of us…

But I find comfort in something my brother Gary told Poppi at the hospital.

Even when Dad wasn’t physically with us, his voice in our ears reminded us to work hard…to give your best no matter the task.

And to put the needs of others first.

The best way for all you grandkids…and really all of us… to remember Poppi….

His life wasn’t perfect….but it made a difference.

The words of the poet Ralph Waldo Emerson summed up Poppi’s time with us perfectly.

To laugh often and much;

To win the respect of intelligent people and the affection of children;

To earn the appreciation of honest critics and endure the betrayal of false friends;

To appreciate beauty, to find the best in others;

To leave the world a bit better, whether by a healthy child, a garden patch, or a redeemed social condition;

To know even one life has breathed easier because you have lived.

This is to have succeeded.