Master of the Kitchen

Part II of Joan Cergol/Greg Cergol blog duet: "We look out the same window, why don't we see the same thing" 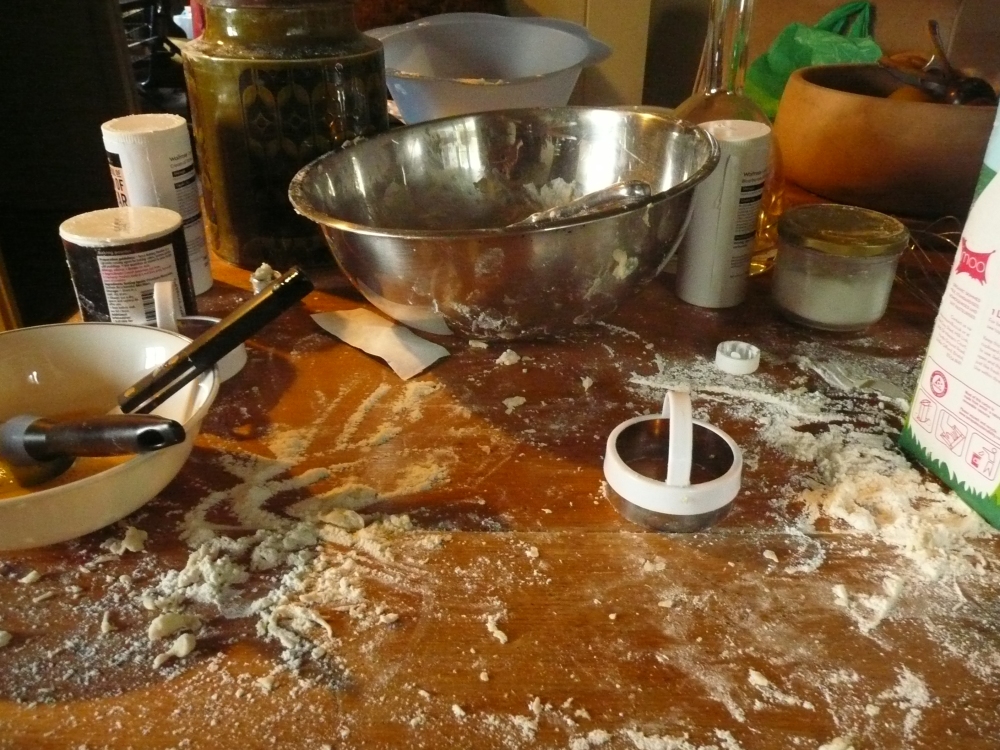 In my case,  I married my father.

Joan prefers to wear the tool belt in the family. She loves to fix things, tinker with gadgets and work outdoors.

As she does, you will often find me in the kitchen, answering the call of a good pasta recipe or a complex dessert.

Visitors do an occasional double take when they see my wife toiling in the dirt and me behind the stove; but for us, it works.

Most of the time.

Joan has been known to take her “Mrs. Fix-it” role a tad too far.

Like the time she nearly electrocuted herself trying to install a new stove. Or fell into the fishpond while trying to clean it. (She survived both mishaps.)

I can just hear some of you asking with disdain: “How can a good husband leave these chores to his wife?”

Joan has a passion for household projects while I have always been indifferent to them.

And “a man has got to know his limitations.” My dad’s pedigree as a prodigious home contractor never transferred to me.

And I get edgy when I am attempting things out of my comfort zone.

In fact, my wife loves to warn others to steer clear when I have a hammer in hand. So, I let her take the lead.

But that doesn’t mean I escape the work.

Often, I am pulled into projects to serve as the “grunt.”

Cleaning up debris there.

Doing the bulk of the painting after Joan chooses a color for the walls.

Laborer to my wife’s role as supervisor. (Remember when I explained her ancestors were Italian royalty?)

And in the end, despite my efforts, credit for a job well done goes to the supervisor.

“Joan, the bedroom color is stunning.” (Was I away on vacation when these jobs were done?)

My work in the kitchen has made me the de facto family chef. (My grandfather actually was one when he first came to the U.S.)

And no matter who cooks, I get the credit for a meal well done. (This can make my wife, a wonderful cook in her own right, a bit testy around clean-up time.)

Most amazing of all, I think, is the fact that our extended family has actually come to recognize and accept this reversal of roles.

That’s saying a lot in a clan of Italian immigrants.

Joan and I didn’t plan to be different. We didn’t make a conscious decision to shake things up.

We just followed our hearts and left the gender rule book to others.

So I prefer to tool around fixing things to perfecting a soufflé!

And I make the grandest of messes with all of my projects.

And despite what the man tells you, I never leave a worksite without cleaning up, leaving Greg the “grunt” to attend to those lesser chores.

Well, maybe now and again I will ask him to help lift something I cannot. But my various physical injuries are testament to my not asking enough.

Here’s a newsflash about Greg Cergol, the chef: when the newsman announces he is on to his next culinary creation I am both excited and mortified, continually reassuring myself it will all be good in the end.

The man has a knack for using every bowl, pot, pan, utensil and gadget in the kitchen.

Oh yes indeed, Greg is a cooking virtuoso! As for the kitchen clean-up, not so much.

Just after I have tackled, completed and cleaned up from some very involved home project I am called into the kitchen by Greg to inspect or taste his latest cooking or baking achievement.

As I scan the kitchen I have to wonder how much of the ingredients actually made it into the dish itself because by all accounts they are smeared to the refrigerator, sink faucet and oven door handles, splashed across countertops and caked into bowls and utensils piled sky high in the sink.

Sweet Jesus! Does the man ever wash his hands before moving from one step to the next?

Greg is oblivious to the kitchen catastrophe. His is in some Lidia Bastianich-induced nirvana.

Maybe it’s genetic. Greg’s already told you his grandfather was a fine chef. And that is really good for him, and, of course for me and our family, once we sit down to dinner.

But getting there can be a rough road because those same great chefs do not clean as they cook. In fact, they don’t clean at all.

Have you ever seen Wolfgang Puck or Emeril Lagasse wash a dish or a pot while the garlic is peacefully sautéing? Do you think they ever would?

I didn’t think so. No, the master chef soaks up his praise and then struts from the kitchen, dramatically releasing the ties from his apron, signaling his work is done. He leaves the clean up to the lesser-evolved cooking species.

So here comes the kitchen grunt.

Rushing to the sink like a firefighter to a blaze.

Yes, people, this time that grunt is me.

But I hardly mind it.

Those of you who have experienced Greg’s remarkable homemade pasta dishes, cakes or pies know it’s true.

He’s the master of the kitchen.

And I, his clever clean-up assistant/home-repair maven.