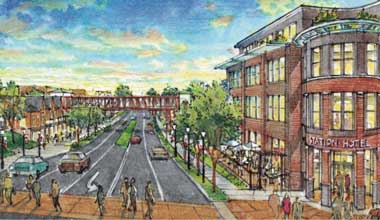 A spirited community meeting this week got me thinking about what I could recall of an era in our Town’s history that neither time or events can erase from the minds of those who lived to see it: 1960s Urban Renewal in Huntington Station, and its unforgiving aftermath.

For many, the lingering malaise over unfulfilled promises of that “urban renewal plan” can be cut with a knife.

As a Huntington High School student during the late seventies, I dropped quite a bit of my babysitting earnings at the “Big H” shopping center. The high school’s then open-campus policy allowed us to venture to the nearby Big H during lunch period or study halls.

A short walk led to a slice of “real pizza” and to our favorite clothing boutique called Select, or to Martins, Woolworth and Sears. On weekends we headed to the York Theater nestled in the corner of the shopping center.

When I returned home from college in the mid-eighties I was saddened to see how the once thriving and popular shopping center had fallen into decline. By the late 1980s the Big H had hit an all-time low. The stores we had once loved were reduced to dark vacant spaces.

The departure of longtime anchor tenant Sears was the most sobering indicator that the Big H was in trouble. While a Pathmark eventually occupied the space that was once Sears, it struggled too, and eventually closed.

Fortunately, the nineties brought about the successful private redevelopment of the Big H property under the leadership of Huntington Town Supervisor Frank Petrone.

What was once an eyesore had now been transformed into a thriving commercial center anchored by national retailers, along with a Town-managed community center that was negotiated as part of the Big H redevelopment plan. The $30 million private sector revival of the Big H marked the Town’s first step in the revitalization of Huntington Station.

By the time I joined Supervisor Petrone’s staff in early 2002, Huntington Station’s continuing revitalization remained at the forefront of his agenda, and the Supervisor assigned me to assist him in advancing those goals. In doing so, I found myself working alongside an administration that was the first to begin the process of addressing the unfulfilled promises of Urban Renewal that preceded them by nearly a half century.

The Town, in response to community input solicited via the Town of Huntington Economic Development Corporation (EDC), for which I serve as Executive Director, invested millions in local, state, county and federal grant funds enhancing the New York Avenue streetscape with new curbs, brick sidewalks, decorative streetlights and street trees.

We’ve acquired and developed parcels to create Huntington Station Gateway Park, featuring a community garden. Next in the cue is the transformation of a blighted former NYSDOT right of way into an attractive pedestrian plaza to be known as Gateway Plaza.

It has taken some years to secure and cobble together grants from various sources to fund these community enhancements, but at last, most of our public projects have come out of the ground.

We also responded to residents who asked for a new grocery store and recreational opportunities by cultivating and fast-tracking private sector redevelopments, resulting in the Huntington Station Food Plaza and Station Sports Family Fun Center.

In addition to serving the community, these completed projects, among many others, are a clear signal of a municipality’s commitment to Huntington Station using all of the resources local government can bring to bear.

But we know there is more work to do.

The Town and EDC reached a crossroads about one year ago in planning for its next step in the restoration of Huntington Station’s downtown business district.

Despite our best efforts, individual developers were reluctant to invest in piecemeal developments at specific sites without the knowledge and confidence of a privately-driven comprehensive New York Avenue commercial corridor overhaul in the works.

I was born a bit too late to have a clear memory of the Huntington Station downtown, the heart of which was ripped out under federal Urban Renewal. But many families, especially longtime Huntington Station residents David and Barbara Campbell, who bought their home on Northridge Street in the fifties, remember it well.

The lost downtown featured convenience retail with apartments above, akin to Huntington Village.

Barbara Campbell told me that the realtor highlighted the fact that Huntington Station’s downtown area was under “Urban Renewal” as a major selling feature. When Barbara asked what Urban Renewal was, the realtor could only surmise that whatever it was, it had to be good. After all, isn’t the word “renewal” one that connotes something positive and new?

A few years later, the Campbells watched the downtown strip across from Northridge Street get bulldozed to the ground and replaced with a parking lot.

Like so many, David and Barbara Campbell are still waiting for a reprise of their downtown, as are the hundreds who turned out for our community meeting focused on Huntington Station’s future downtown redevelopment.

Despite the differences of opinion that have fueled heated debates about Huntington Station,  the Town and community have always shared the common goal of seeing its revitalization to completion.

The meeting provided an opportunity to introduce the newest partner at the table, Don Monti, and his Renaissance Downtowns, LLC team, as the Town’s selected private Master Developer for Huntington Station.

Renaissance will lease office space at 1266 New York Avenue that is located in the heart of Huntington Station’s commercial corridor. In this way, Renaissance can be closely situated for the ease and convenience of residents seeking information or otherwise looking to get involved.

Renaissance plans to launch a social media platform as another tool to solicit ideas and build community consensus. In addition to their personal meet-ups, the social media platform will allow virtual community meetings to be held, thoughtful discussions to take place, and resident ideas to be shared and voted upon to warrant further study and action.

Renaissance’s approach to a comprehensive community-driven redevelopment, marked by “process before plan,” will build off of the multi-million dollar foundation created by the Town’s many public improvements.

In partnership, the Town and community, with a master developer at their side prepared to invest millions into Huntington Station, can move forward to achieve the mutual goal of completing the revitalization in a way that we can all be proud of.

I am hopeful that when those shovels start hitting the ground, we can haul away the 1960s Urban Renewal malaise along with the construction debris.