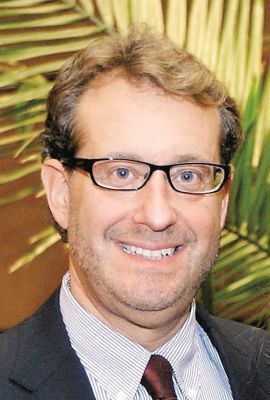 Larry’s untimely death was a horribly bitter pill to swallow. After learning the sad news I pondered the idea of our Town and a life without Larry in it, and simply could not process or accept it. How could Larry be gone? Among many things, he was a powerful life force, an intellect, a successful lawyer and businessman, a traveling sideshow comedy act, and, a generous spirit who endlessly and joyfully gave, expecting nothing in return. And he did it all with such ease, like it was nothing. And just like that, Larry was gone.

Life could not have sent us a more powerful or cruel reminder of its fragility.

Larry had a superb sense of humor and loved to make people laugh, which may have been one of his most endearing qualities. I first met Larry nearly twenty years ago while working on a campaign to help preserve Huntington’s OHEKA Castle. Larry loved Huntington, his hometown, and made it his business to advocate for the best of anything our Town had to offer. So, it was no surprise that Larry appeared on the scene to do his part to save a priceless architectural and historic Long Island Gold Coast mansion.

It was in the trenches of the OHEKA campaign that I first got to know and appreciate Larry. So many years later, and with a heavy heart over his life cut short, I manage a half smile remembering Larry dressed as a rather homely bride at a 1996 OHEKA Halloween party, complete with intentionally misapplied red lipstick for a creepy Whatever Happened to Baby Jane? effect. I believe that Larry would be pleased and proud to know that I, and probably a great many, still recall his grand, but clumsy, entrance into the Castle as Bridezilla all those years ago.

In more recent years, I had the pleasure of working alongside Larry in his leadership role at the Huntington Township Chamber of Commerce, attending many meetings with him and other business leaders to discuss important economic development issues and initiatives. A scant two weeks ago, Larry invited me to his May 21st breakfast inauguration as Huntington Township Chamber of Commerce Chairman. During his very inspiring Powerpoint presentation and installation, Larry repeatedly referred to the event as his “inauguration/bar mitzvah,” generating much laughter in the room. He was having a great time and we were all so very much looking forward to working with Larry to fulfill the many new goals and visions he outlined that morning in his inaugural address.

The days, weeks and months ahead will be difficult and painful as the Huntington Chamber and our Town work to regroup from this monumental loss. And, Huntington will surely never know another son quite like Larry Kushnick.

As we support each other in this time of sadness and loss, let us take some measure of solace in the knowledge that Larry was allowed to stay on with us just long enough to scratch out a roadmap offering clear directions of where he was looking to take us as Chairman of the Huntington Chamber. I know, if we only follow Larry’s lead, and go on to achieve the many goals and visions to which he aspired, we will honor his memory in the very best way possible. And, Huntington will be better for it.

We must now muster our energy and resolve to move forward to the many tasks ahead to complete this precious and unfinished life’s work. And in doing so, we must remember to find the joy and laughter along the way.

Larry would want it no other way.