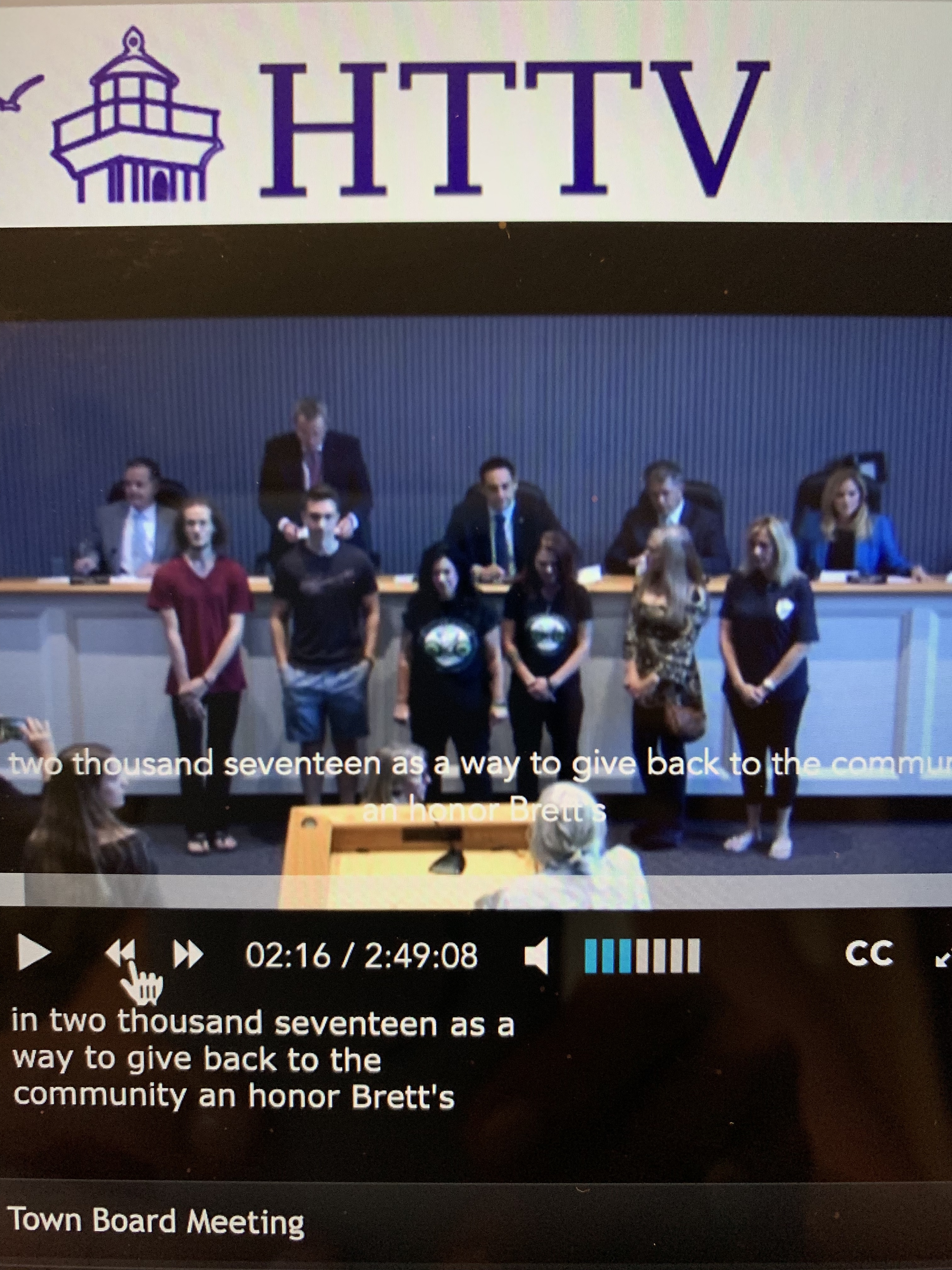 Huntington Councilwoman Joan Cergol announces the Town’s debut of real-time closed captioning of Town Board, Planning Board and Zoning Board Appeals meetings for viewing on the Town’s government access television channel and on the Town’s website.

“This is an important expansion of both the Town’s transparency of government actions and its ability to better serve the disabled community,” said Councilwoman Cergol, whose initiative in early 2018 first began live-streaming of the meetings.

“As a member of the Huntington's Citizens Advisory Committee for Persons with Disabilities, I want to thank Councilwoman Joan Cergol and her staff for meeting with us and quickly acting on the committee's suggestion to add closed captioning to town meeting videos,” said committee member Len Urban. “People like myself with a hearing loss, depend on closed captioning to enjoy television, movies and also to keep informed.  We can now follow the comments, conversations and debates at Town Hall easily at home without the frustrations of not hearing clearly.”

When Councilwoman Cergol met with the Town’s Citizens Advisory Committee for Persons with Disabilities, committee members cited two actions they wanted the Town to pursue: expanding HART Bus paratransit service to take residents to doctor’s appointments at two medical facilities on the east side of Commack Road; and, adding closed captioning to the town meeting broadcasts.

Councilwoman Cergol contacted the Town’s Department of Transportation, which agreed to a pilot program expanding the HART paratransit service to the Memorial Sloane-Kettering facility and to the Memorial Sloan Kettering Cancer Center at 650 Commack Road, Commack and the St. Catherine & St. Charles Health & Wellness Center and Stony Brook Advanced Specialty Care, both at 500 Commack Rd.

The process that led to closed captioning was more involved. A search of other municipalities that provided closed captioning found that some used a paid service in which people listened to the meetings and added the captions, not necessarily in real time.

The Town’s Information Technology Department, however, said it preferred to seek a piece of speech-to-text equipment that would be more cost effective and allow instantaneous translations. The issues centered on both cost and accuracy. Cergol’s staff began contacting governments throughout the United States which led to conversations with officials in Austin, TX, whose captions appeared to meet the accuracy test. They identified the equipment they used and the manufacturer – a company, as it turned out, headquartered in Farmingdale, LI.

Cergol’s staff passed that information on to the Information Technology Department, which arranged to borrow the device for a test. When that test met the town’s standards, and was then favorably reviewed by a hearing-impaired member of the Citizen’s Advisory Committee, the decision was made to purchase the equipment, at no cost to taxpayers. Cergol tapped the franchise fees paid to the Town by Altice and Verizon to fund the equipment purchase and associated monthly usage fees.

“I want to thank Citizen Advisory Committee for Persons with Disabilities member Len Urban for beta-testing the closed captioning technology on behalf of the town’s hearing-impaired community, and Committee Chair Marianne Iannaccone and her committee members for their very important role in sensitizing us to the barriers they confront so we can do all we can to remove them,” concluded Councilwoman Cergol.

The meetings can be viewed on the Town’s government access channels, Optimum Channel 18 and FiOS Channel 38, or on the Town’s website at www.huntingtonny.gov/meetings